Good morning and welcome to day twenty nine of #NaPoWriMo where I’m looking in a window instead of looking out of one. I did go back to my childhood, but I dropped into my own home, and knew I had a picture of my mom sitting at “her spot” at the kitchen counter. I used the #haikuchallenge word – drop for the first part of the poem.

Mom always said,
You’ll live until you’re twice married
Whenever her children fell down
A phrase I found quite peculiar

Mom always said,
You’ll live until you’re twice married
A phrase I found myself repeating
Whenever my children were upset

Mom never said,
You’ll live until you’re twice married
My twin would not pass it down
After her second marriage

NaPoWriMo Prompt – And now for our prompt (optional, as always). Today’s prompt comes to us from Juan Martinez. It asks you to think about a small habit you picked up from one of your parents, and then to write a piece that explores an early memory of your parent engaged in that habit, before shifting into writing about yourself engaging in the same habit.

Good afternoon and welcome to day fifteen of #NaPoWriMo. My mom always had little catch phrases like, “I’m blind in one eye and can’t see out the other;” “if it had teeth it would have bit you;” and my favorite, “You’ll live until you are twice married.” A very cute one I found myself repeating to my own children while they were growing up. I always thought it was odd, but never really thought too deeply on its meaning. Then one day my sister said, I never tell that to my children because I am married twice. So…? The phrase is actually conveying you will live a good long life because 1) you won’t get remarried or 2) you’ll get married a second time after living a long, happy life with your first spouse and they’ve passed away. There was never any contemplation of divorce in the saying. Oh well, I still use the phrase because yes, I’m still happily married to spouse #1. 😛

I also remind my children, Life’s a b@$#% and then you die. Maybe a little insight to marriage number one not being happily ever after, 😉 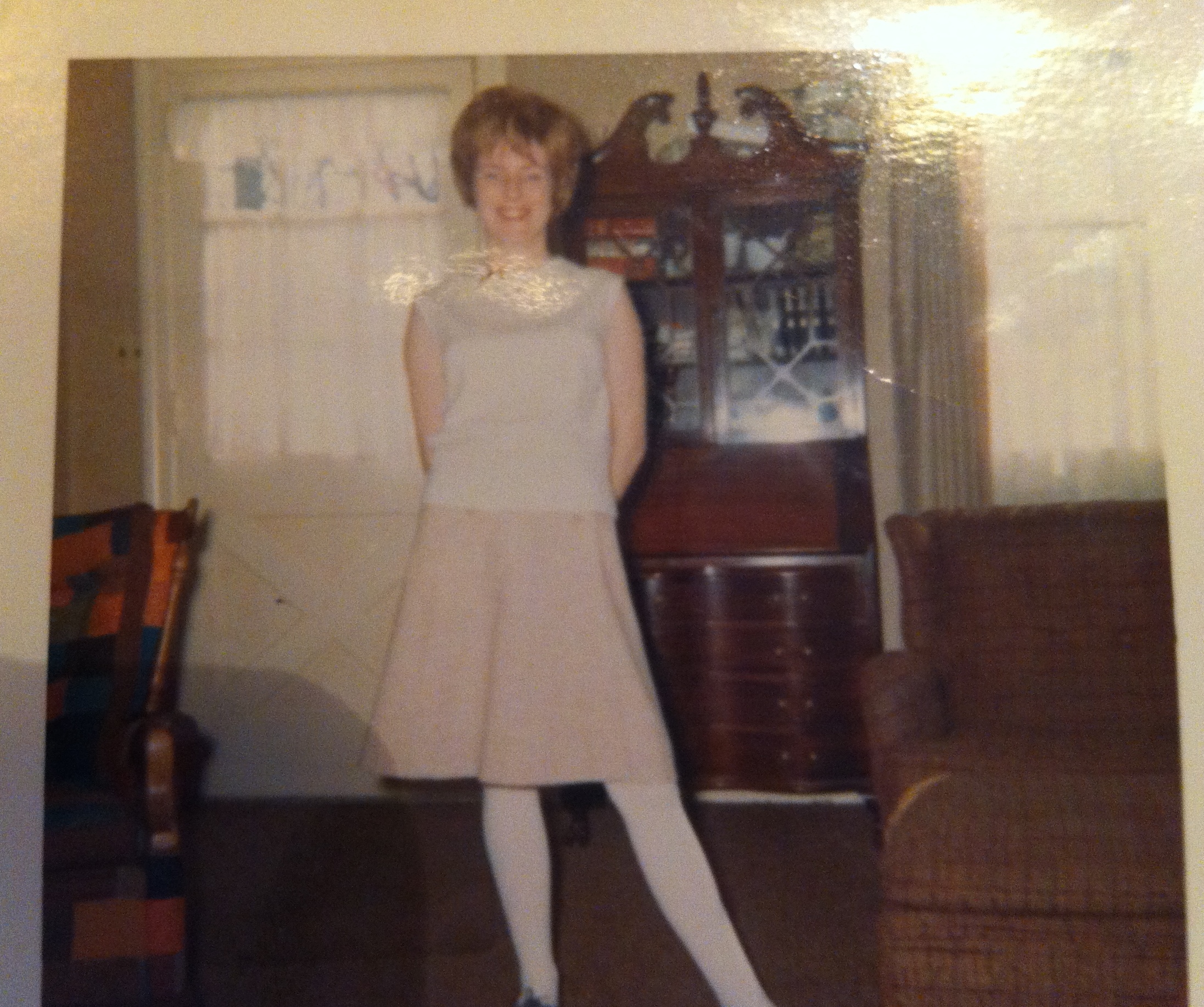 Mom in 1967 when my dad was in Vietnam. Six years before I was born.

NaPoWriMo Prompt – Our prompt for the day (optional as always) follows Gowrishankar’s suggestion that we write a poem re-telling a family anecdote that has stuck with you over time. It could be the story of the time your Uncle Louis caught a home run ball, the time your Cousin May accidentally brought home a coyote and gave it a bath, thinking it was a stray dog, or something darker (or even sillier).

Once upon a time, spring 1960, my mother was a senior in high school and part of the first graduating class of her high school. On the first senior skip day, the story goes the kids with cars loaded up with students and left school. My mom was driving her boyfriend’s car, and one of her classmates raced the boyfriend but could not win. That afternoon he was next to her at the red light and indicated he wanted to race. My mom figured, What the hell. She’s never raced in a car which made her classmate figure he had the advantage and would be able to beat the car for once. But my mom was pretty smart and shifted every time her classmate did and she won the race. True story? I have no idea, but I always loved hearing it. Oh and the wonders of the Internet – look what I found. 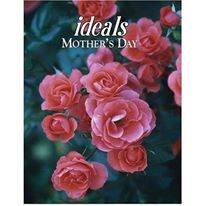 It’s hard to believe the little bundle of joy who made me a mom for the first time will be 19 on Saturday! She was also the inspiration for the first story I had published. Last year at this time she graduated with highest distinction with an AA at EMCC. Then a week later graduated from high school. She just finished her first year at ASU and maintained her 4.0 GPA.

The second little one to come along three years later has two weeks left in her sophomore year in high school. She, too, has all As and at the end of the month will start taking classes at EMCC through the ACE program. Last weekend she took her accuplacer over at the college and scored a 95 in reading and a 6 on the writing. She actually followed her English teacher’s formula for essay writing. Who would have thought English teachers know a thing or two about writing. 😉 A score of 5 places a student in Eng 101 and 8 is the highest score on the test.

And here is my first poem dedicated to Motherhood. Happy Mother’s Day to all the Moms out there! 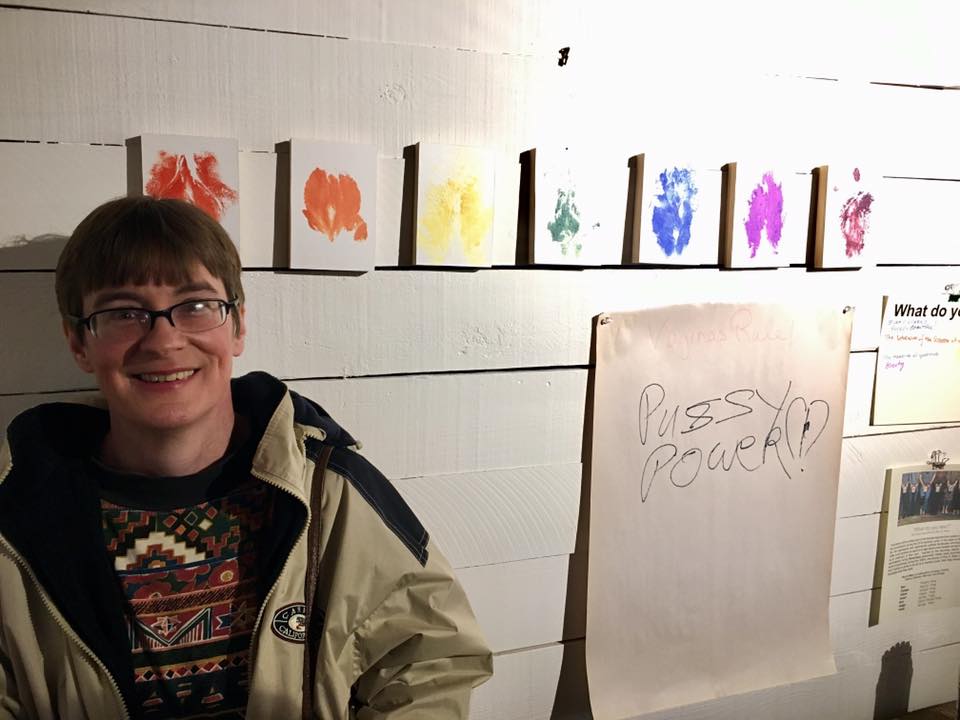 Me at the Nasty Women Unite in Phoenix exhibit

Saturday January 14 was the opening night for Nasty Women Unite in Phoenix. Wow it was crowded and it was a cash and carry show supporting Planned Parenthood. I told Shawn the walls were going to be bare by the end of the night. And they are open again this Friday and Saturday. The first night over $11,000 was raised for the cause. Early this week they opened submissions for more artwork to display and sell this weekend.

As Shawn and I waded through the crowd, he snapped a few photos of me. I kept glancing at his phone and commented, I’m starting to look like my mother! His reply, One day you put your arm in your sleeve and your mother’s hand comes out. He enjoys reminding me of the words of Adrienne Rich.

“At 45, you put your arm into your sleeve,
and your mother’s hand comes out.”

Hey, I have a couple more years to go there, mister. But speaking of poetry and prose, this Saturday January 21st is the Nasty Women Reading should be another interesting evening. The haikuchallenge word on twitter today is doom so I wrote –

Mom,
Guess who
I am

NaPoWriMo Prompt – Today, I’d like to challenge you to write a poem that incorporates “the sound of home.” Think back to your childhood, and the figures of speech and particular ways of talking that the people around you used, and which you may not hear anymore. My grandfather and mother, in particular, used several phrases I’ve rarely heard any others say, and I also absorbed certain ways of talking living in Charleston, South Carolina that I don’t hear on a daily basis in Washington, DC. Coax your ear and your voice backwards, and write a poem that speaks the language of home, and not the language of adulthood, office, or work. Happy writing!

This is a combination as I say Fibber McGee to my children often. When I was young, my mother would say Fibber McGee, I can’t remember the context but she had used the name enough I remembered it. I remember giggling, too, because who is really named Fibber McGee. Flash forward and my girls are constantly being someone else and want their mother to guess the character. One time out of exasperation I said, I don’t know, Fibber McGee. The girls started laughing and said, that’s not a real name. I told them, I don’t know I just remember your grandma saying it. I knew they’d get a laugh out of it, because I always had. But one day I was curious enough to google the name (the handy dandy tool wasn’t around when I was a child) and sure enough grandma didn’t pull the name out of her… MOM. 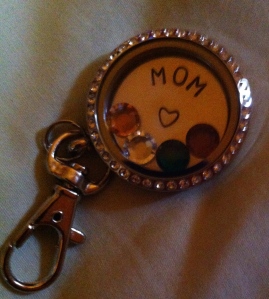 The Wednesday poetry prompt at Writer’s Digest was to write a poem, Hold _ . The first thing that came into my head, Hold your horses.  My mom would tell us this when we were antsy.  Much like when she would tell us we would live ’til we’re twice married whenever we were distraught about something. I used the twice married line for the first assignment of my MOOC in July.

The mom charm was given to me by Rachael.  One of her classmates sold charms as a fundraiser for her trip to Chile.  The pieces inside are Shawn, Gretchen, Rachael and my birthstones.