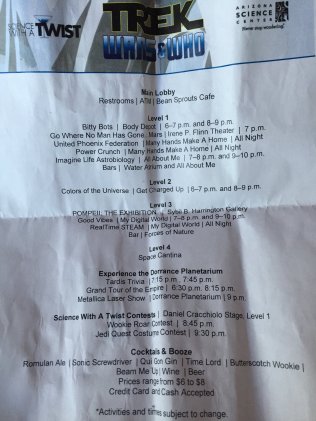 Good Morning! And welcome to May, aka decompress month. Yesterday was May the 4th and Shawn and I went to the party at the Arizona science center. As we were getting in the car, Shawn asked me for directions to the science center. I don’t know; it’s downtown. It’s not like we haven’t been there before. Shawn looked it up and it said, now closed. I laughed, I know it’s an after hours party for old geeks. You had to be over 21 to attend. I had the Romulan Ale (not Roman autocorrect) and Sonic Screwdriver. Shawn had a Butterscotch Wookie (I think) I can’t remember now. And we basically got to roam the science center without little beings running all over the place. Then we went over to Grand Ave. It was first Friday. That is where I printed the May the 4th be with you poster. Yes, I rolled the printing press myself.

And as you can see, the verse did not drive me mad. I wrote over 30 poems in April, counting the #haikuchallenge poems for twitter. I missed one prompt. But I did more than one poem for a couple of the prompts so over all I’d say it was a successful month. Arizona schools got back to work yesterday. Gretchen had a full day of school again. Yay! But Thursday was Rachael’s last exam for her semester, and still no word on her summer gigs. She is now home. Which will be a good thing for a little while anyway as Gretchen has to take the math placement test at EMCC for her fall ACE course. She was going to take it today after her final Eng 102 class, but she looked it up and the testing center is only open Monday – Friday. Rachael will have to bring her over one day after school. I told Gretchen she should have taken it on one of her days of no school, but did she listen to her mother?

May the 4th story
Doctor, Captain, Wookiee meet
Science with a twist

Yoda confesses
Page turners they were not, as
he burns ancient texts

As I’m looking through my reader, the theme of Frank’s next Haikai challenge catches my eye, how can I pass up a May the Fourth challenge. You know I write sci-fi themed poetry as much as possible. Here is a string of Star Wars poems written a couple years ago for #NaPoWriMo. Astonishingly enough a copy of The Last Jedi has yet to find its way into this house. And yes, I took full advantage of the #haikuchallenge word – ancient. It works well for poems written about “A long time ago…”