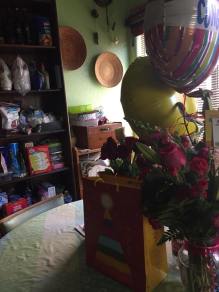 Since Rachael’s birthday is on a Sunday and she works at 4 paws, she wanted her birthday celebration yesterday. Well yesterday also happened to be graduation day for the high school and the delivery person came when the neighbors were at the ceremony. We got to hold onto the flowers. Of course I had to take a picture of Rachael’s birthday present by all the nice flowers. The flowers behind the present are my Mother’s Day roses and the bouquet in the forefront with the balloons is the neighbor’s. Rachael wanted to have sushi for her birthday, but we found out Friday night trying to make reservations that Blu Sushi is closed. The picture I shared yesterday of Rachael’s 19th birthday was the last time we ate at Blu Sushi without knowing it would be the last time. Rachael decided on Nakama Sushi restaurant. After dinner the gang came over to our house. Shawn was able to go across the street and deliver the bouquet; he came home with a piece of cake for his troubles. The rest of us played Cards Against Humanity. It was the first time we went through the entire deck. Rachael won with 24! cards. It was close though because Karolena got 23. I ended up with 16; Gretchen 15 and Emmett got 12. The poor guy was playing too nice of cards the game is titled against humanity for a reason.

I did win the haiku card 😉

The Big Bang
Some god damn peace and quiet
Geese

The #haikuchallenge word on twitter today is rely so of course I had to tout my victory.

Rely on nature
Cards Against Humanity
End haiku with geese

I found out this morning Shawn is having a solo show at Alwun House later in the summer – August 24-29. Since his brother’s birthday is the opening date, I thought he was doing it as a memorial for Scott; he said no. But now he may include a piece dedicated to his brother. This summer will be Shawn’s first trip back to Buffalo since Scott’s funeral. Maybe he’ll get a chance to photograph some places that remind him of Scott to put in the show. Okay and now that I’ve slipped down a sad road on Rachael’s birthday, I think I’m going to stop typing.

I have been way too quiet lately. December was very busy here, my friend, Rick K, came to visit us. It was a nice time. We drove around in a convertible and it happened to be a warm (mid 70s and sunny) even for us in the desert. 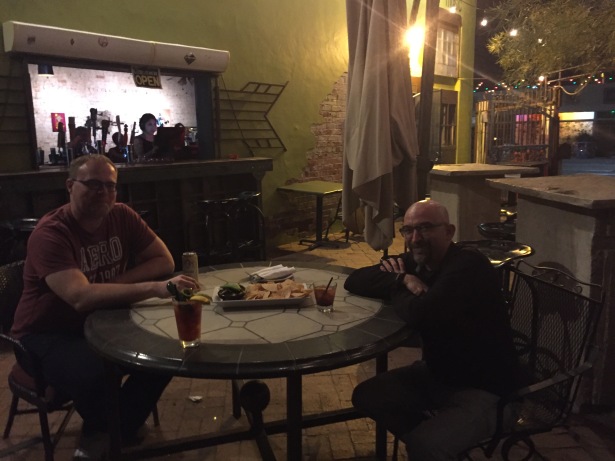 strike that, reverse it. In 2013 there were four funerals and a wedding. The last month was especially hard. My brother-in-law passed away on November 27 and then my cousin on December 27.

We were busy traveling to El Paso, TX to visit my mother-in-law and my nephew stationed at Fort Bliss last Friday. When we arrived, my sister asked me what happened since I live close to my cousin, but I was unaware anything was wrong.

2013 was also filled with Happy Times. Here is Gretchen singing a solo in the spring concert. At the end of May we vacationed in California to attend the wedding of one of Shawn’s cousins. In February our nephew, who is stationed at Fort Bliss, flew out for a visit before heading off to boot camp.

In June one of my other cousins was hit by a car. He is still rehabilitating. But over the summer we had a few family members fly out to visit him and help my uncle. My parents also celebrated their 50th wedding anniversary in June.

We rang in 2014 at my mother-in-law’s with a drink to those we lost in 2013. First her boyfriend’s mom passed away; then one of Shawn’s uncles passed away followed by his brother and last my cousin.