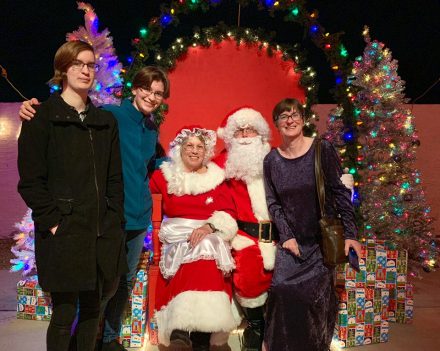 We had Christmas dinner at Nonnie’s last night, and as we drove into our neighborhood we noticed signs pointing the way to Santa Claus. Of course we had to follow them. Yes, I was able to get a family photo with Santa and the Mrs. 😉 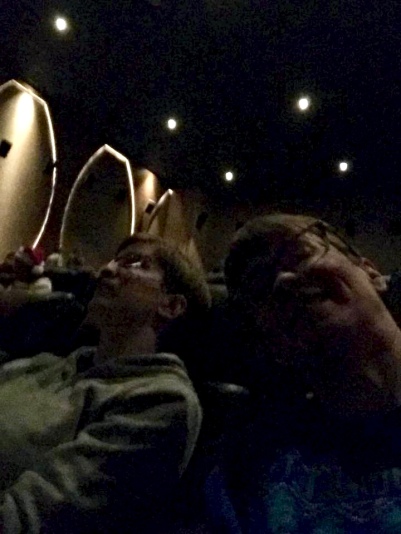 A long time ago… doesn’t VHS say it all, I wanted the first bundled release of Star Wars IV, V and VI. It was only a couple years after Shawn and I were dating. And I knew my boyfriend would get the hint. Well apparently so did my Dad (he actually went out and bought a Christmas gift). He told my Mom, Roni needs the box set. My Mom told him my Christmas gifts were complete already. I also think she knew Shawn was getting me the set. Imagine my surprise when I opened my gifts Christmas morning to find the VHS set in my parents’ gifts to me. Luckily my Dad brought home the box and gave it to my Mom to wrap; when Shawn came over later with his gifts no Star Wars. My Mom called him and told him he had to rethink his gifts. Actually I would not have minded having two sets.  Believe it or not, we still have a VHS player and Gretchen still watches Empire Strikes Back on it. Yes, we have the movies on DVD, too. But no one in this house likes the redos Lucas made on the original trilogy.

Twenty some years after getting the best Christmas gift ever, Shawn, Rachael, Gretchen and I went to see Star Wars The Last Jedi on Christmas Day! 😀 Merry Christmas to me.

Hello readers, no I have not fallen off the face of the Earth (we believe it’s flat again, right?) It has been a busy couple of months. My friends Rick and his husband, Charles, along with another friend, John, all came out to visit the weekend before my birthday in November. Then for my birthday, Shawn and I went to one of the wine dinners hosted by the Wigwam Resort – excellent wine and meal. Thanksgiving it was quiet, only the four of us here at home. Then Rachael was done with her semester a couple weeks later and to celebrate another straight A semester, she got her wisdom teeth pulled the first day of winter break. As of today that was one week ago, and yesterday we drove over to pick Gretchen up from school. In the car, I turned to tell Rachael something and almost screamed. Her jaw had a big yellow bruise and it startled me because I couldn’t think who would have beaten her. Then I remembered she had her wisdom teeth pulled; it’s funny how I did not notice the bruising in the light of the house. It was the first time Rachael has ventured out since the procedure.

At the end of October, Rachael was inducted into the Phi Kappa Phi Honor Society. Gretchen has completed another class at EMCC through the ACE program and still has a week to go before the semester finishes at high school. Meanwhile we’ve been getting ready for Christmas. Last weekend Shawn, his mom and I went out to the German Christmas market at Frontier Town, Cave Creek. The three of us had a fun time. And yesterday I spent some time wrapping presents. Yippee my favorite chore. 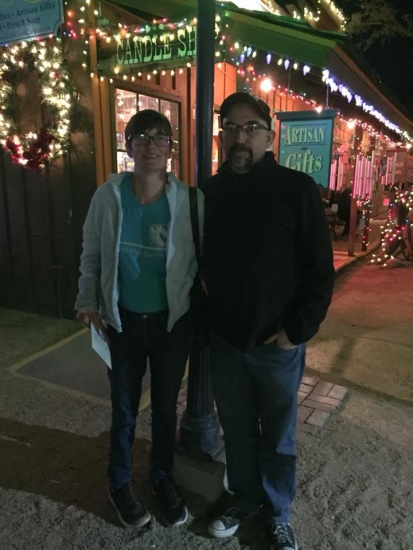 So back in August I wrote about taking out Grandpa’s guitar because Gretchen was taking guitar at school. And of course I got a picture of our vintage Martin with Rachael as Gretchen avoids the camera. This past weekend, I was actually able to record Gretchen playing the guitar. I told her it would be nice if Grandpa could see his guitar was being played again. She actually let me take video. But it’s only suppose to be seen by Grandpa.

Sure… whatever makes you happy.

The #haikuchallenge word on twitter is unaware today. Everyone keep my secret.
Merry Christmas!

Jing-a-ling, Ring-a-ling
Hoskings are wishing a
Merry Christmas to all
Happy New Year!

The poem included on my holiday cards this year. 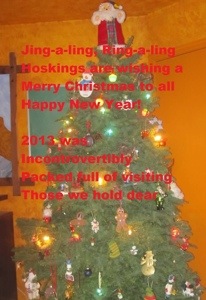