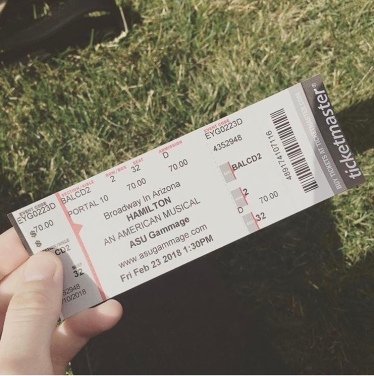 Friday was the big day for Gretchen, she was off to see Hamilton with her school. We saw Wicked at Gammage auditorium a few years ago; I don’t remember the playbill being called gammbill. (Okay it was March 10, 2012) more than a few years ago. Gretchen loved her second Broadway musical at Gammage. Mom was a little jealous but not overly when I saw the balcony seating. We had balcony tickets for Wicked and the height really got to me. Then Saturday Gretchen went to a friend’s birthday party, they sat together at the play, so I asked her if everyone was talking about Hamilton at the party. She said yeah, and we were all talking about it in class, too. This one confused me because the play was Friday and they left at 7:30am and didn’t get back to school until 6pm. I totally forgot about her Saturday morning Eng 102 – doh! So Hamilton inspired haiku 😉

Hamilton, a fool
not throwing away his shot
was killed in the end

The one below is a kimo. You can read about the form at Writer’s Digest.

Two men stand back to back, pistols ready
when honor is in question
after ten, turn to solve

Then on Sunday, Rachael was back to work. She did get over to the medical clinic on campus and was officially diagnosed with the flu, but there wasn’t any other problems so she was told ibuprofen and rest. She actually stayed home on Wednesday and she and I watched the second half of season one of Star Trek Discovery. I’ll make my children into full fledged trekkies come hell or high water. When Rachael came home from work, she had term papers to write. The one thing about being sick for more than a week, very little homework was done. And of course, after she wrote Mom gets to proofread. Oy vey! One of the dullest papers I have read yet. Then we went to see Black Panther so my weekly blog update for the poet blog revival is a day late.

On the positive side, I think all the cleaning I’ve been doing paid off. Rachael got sick over a week ago and no one else in the house has shown any symptoms. And last week I had two haiku published outside of my own website and twitter.