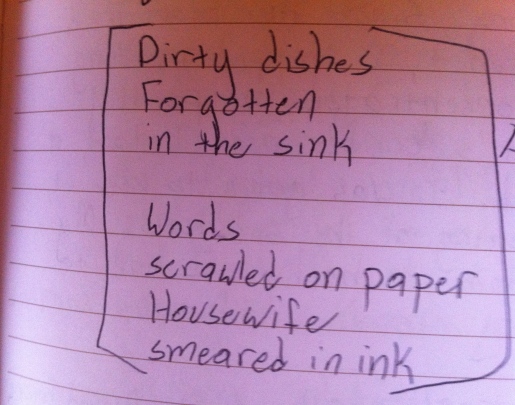 NaPoWriMo Prompt – And now for our (optional) prompt. In our interview, Kyle Dargan suggests writing out a list of all of your different layers of identity. For example, you might be a wife, a grandmother, a Philadelphian, a dental assistant, a rabid Phillies fan, a seamstress, retiree, agnostic, cancer survivor, etc.. These are all ways you could be described or lenses you could be viewed through. Now divide all of those things into lists of what makes you feel powerful and what makes you feel vulnerable. Now write a poem in which one of the identities from the first list contends or talks with an identity from the second list. This might turn out to be kind of a “heavy” exercise, emotionally, but I hope you will find the results enlightening.

Good morning and welcome to day seven of #NaPoWriMo. I had a small problem with my list of identities; I couldn’t really divide them. Am I the only one who waivers from feeling powerful to feeling vulnerable? The two identities I picked – poet and housewife, depending on the day each can make me feel great but then each can make me feel overwhelmed. Also I’ve written poems on my different identities before so for today I decided to experiment with a one-bun. I read my first one-bun yesterday over at Ken’s blog. He explains it – One-bun, a form created by Jim Kacian, is a short-form haibun with one line of prose (including title) and a (one-line) haiku.

When I think one line haiku I think American sentence especially since I write poetry in English. I’m not sure the one-bun form really works with this prompt, but I couldn’t quite create a “pep talk” between my identities since they don’t really separate into two distinct groups. The two identities should be fleshed out more than what is possible in this form. I’ll see if anything more develops through the day. Monday I start my remote reading assignment, so daily posts may have to wait for afternoons here. But I worked and wrote thirty poems last year; I think it’ll be fine this year, too.