A couple years ago I submitted my Escape Within poem to an anthology asking for tankas by disabled writers. A couple months ago, they requested my address to send out my contributor’s copy. It finally came in yesterday’s mail. 😀 Thanks, Tommy Rodgers, for your beautiful colors!

My poem on display at 9 the gallery. Remember World CP Day is Wednesday October 6.

A summer day
Sweltering, hot and sticky
The season
Ending soon
The sun shining
After weekend storm
Trees tumbled over
Walls crumbled down
Cleanup has begun
Poet responds
Wishing for fall
And a chill wind

On Friday August 11, I was sitting in my bedroom reading a book – The Winter Horses by Philip Kerr. On vacation in Germany, I went into the bookstore at Dachau and bought a book. It’s about a young Russian girl hiding from German soldiers with Przewalski horses. As I was reading, I heard a crack. Look out the window and even though it is dark, it appears as if the tree is touching the driveway. I go out and investigate. It is touching the driveway. Rachael comes out and we both hear more cracking. So yes, I call my husband in a panic because I don’t want the tree damaging the house. He came home and did some trimming at 11pm Friday night.

In the wee hours of Saturday morning we all awoke to wind and rain. Our neighborhood was right under a microburst. August 12 was the fall kickoff for the ACE program at EMCC. As we were driving to the college, we saw toppled trees and even walls. We were fortunate that the palo verde in the front yard did not suffer any more damage. I was thankful Shawn did some trimming before the storm. Though he is skeptical it is what kept our tree standing. Across the street one family had a tree fall into their bedroom. I think it could have been us too.

Yesterday I read Benita’s Reply poem and thought of the response of summer vs. spring. And because my wedding anniversary and birthday happen in the fall, it is my favorite season. Not to mention between the rain and thunderstorms delaying my flight back home at the beginning of the month and now the cleanup we have to do with the latest round of storms, I’m done with summer. 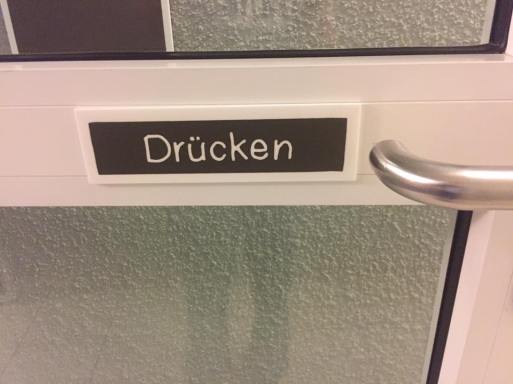 Yes, I think I am having too much fun with the elfchen, elevenie, poem form. And yes, I took a picture of one of the hotel doors because my daughter took German and failed to inform her mother one needs to be drunk in order to use doors in Germany. Actually when I sent her the photo she told me, I don’t remember mom, but it’s either push or pull. Apparently her German taught her useful terms. Drucken is push and was also on doors at the rest areas we stopped at, but they also had push in English. Until I saw a door without the English translation, I didn’t pay much attention to the German. This was not the first time we were lost in German translation.

I’m back home in Phoenix. After all the plane time I logged in, the flight from Buffalo to Phoenix was the worst. It was delayed over 6 hours because of all the thunderstorms on the east coast Thursday August 3rd. I finally got into Phoenix 2:30am on August 4th only to find my husband stranded me at the airport. He didn’t realize Southwest uses the same flight number for their nonstop trips. He checked the flight time for my number and read it was on time 8:00pm, but since it was after midnight he was reading the flight status for the August 4th plane which hadn’t even taken off since it was 1am AZ time and not due to leave Buffalo until 6:30pm Eastern time. He should have clicked check yesterday’s flight. When I was on the plane I sent him a text, on the plane should be in Phoenix at 2:30am Phoenix time. Wheels hit Phoenix at 2:22, I take my phone off airplane mode and get a text, says your flight won’t get in til 8, call me when you land. Needless to say I was a little pissed. I told him 2:30am and I couldn’t communicate with him while my phone was on airplane mode. Meanwhile I was up for 24 hours by this point and then he was getting short with me. He wasn’t the one stuck in an airport for over 6 hours wondering if his flight was going to take off only to find he was stranded at the airport once he finally did get home. On top of that, while I was communicating with him when I was stuck in the Buffalo airport he said, ha-ha looks like you’ll be sleeping at sky harbor and I’ll pick you up later. Another thing that pissed me off, you don’t joke about not picking someone up when they’re dealing with flight delays and cancellations.

So exhausted definitely is the right word right now. Also I’m still a little angry since I don’t see how Shawn was getting mad at me. He was given a pretty accurate time by me for the plane’s arrival and unless he heard different from me should have trusted my last communication. I mean if we were somehow further delayed, I’d most likely be able to communicate it to him. I was keeping him up to date on the flight status throughout the day. Next time I’m seriously thinking of taking a taxi. There was a nice line of them ready and waiting outside the airport.

Well school is starting this week and so far I haven’t even completely unpacked from my trip, let alone go over all the school paperwork. I missed the high school registration this year being in Germany, but apparently not all the paperwork. The reason a parent goes with them is to update paperwork. While Gretchen gets her schedule, id card and bus info, I fill out paperwork. Apparently Shawn had no idea how to fill it out, so it was brought home completely blank. UGH!