Coffee
Water brews
Down into carafe
Every morning I drink
Life

NaPoWriMo Prompt Day 30! Today, I’d like to challenge you to write a poem about something that happens again and again (kind of like NaPoWriMo/GloPoWriMo). It could be the setting of the sun, or your Aunt Georgia telling the same story at Thanksgiving every single year. It could be the swallows returning to Capistrano or how, without fail, you will lock your keys in the car whenever you go to the beach.

Good morning everyone and welcome back to the last day of napowrimo. After today we will return you to your normal programming. Wow! This is year seven for me. And I was only late on one prompt, not too bad. In case you are curious about my first national poetry month writing, it was through read, write poem and the anthology featuring a poem from all the poets who completed thirty poems in thirty days is over on issue. My poem is on page 43.

Now I shall bid farewell, I must go drink some life and get my Sunday moving.

NaPoWriMo Prompt Day 29 – Today, I’d like to challenge you to take one of your favorite poems and find a very specific, concrete noun in it. For example, if your favorite poem is this verse of Emily Dickinson’s, you might choose the word “stones” or “spectre.” After you’ve chosen your word, put the original poem away and spend five minutes free-writing associations – other nouns, adjectives, etc. Then use your original word and the results of your free-writing as the building blocks for a new poem.

Good Morning! Yes, it’s still Saturday morning here in Arizona. As I was contemplating the napowrimo prompt for today, I went over to my wordpress following reader page. I saw a post from elPitchford aka Bryan that today is National Great Poetry Reading day. It helps with today’s prompt as most people will pick a poem from a well known, shall I say great, poet. Then I told Gretchen it’s national great poetry reading day so go find a poem to read. To which she responded, no, never. And of course, I thought of The Raven. And yes, I know nevermore isn’t a noun, but I did stick in door for chamber door. 😉

NaPoWriMo Prompt Day 28 – Today, I’d like to challenge you to write a poem using Skeltonic verse. Don’t worry, there are no skeletons involved. Rather, Skeltonic verse gets its name from John Skelton, a fifteenth-century English poet who pioneered the use of short stanzas with irregular meter, but two strong stresses per line (otherwise know as “dipodic” or “two-footed” verse). The lines rhyme, but there’s not a rhyme scheme per se. The poet simply rhymes against one word until he or she gets bored and moves on to another.

Day 28 of NaPoWriMo and now that I’m done – two days to go. I have never heard of Skeltonic verse. NaPoWriMo was also where I learned about double dactyl which has one stressed, two unstressed syllables (times 2 for 1 line – double). And like the double dactyl as well as any metered verse, it takes me a few tries to get the meter thing to swing. 😉 Also, in case you missed the obvious, I picked up new glasses today.

Wow! What a great achievement. Congrats!

Some time in May 2017, the Silver Birch Press blog will reach a significant milestone — one million total views! As of today — April 27, 2017 — we have hit 990,090 views! Thanks so much to our daily followers, readers, and all of our contributors for this amazing accomplishment! We started the blog on June 21, 2012 — and it’s been a great five-year ride! Our deepest thanks to all of our supporters! Onward!

NaPoWriMo Prompt Day 27 – Many poems explore the sight or sound or feel of things, and Proust famously wrote about the memories evoked by smell, but today I’d like to challenge you to write a poem that explores your sense of taste! This could be a poem about food, or wine, or even the oddly metallic sensation of a snowflake on your tongue.

Welcome back to day 27 of NaPoWriMo. It is the last week of classes for Rachael, final exams are next week. As her gardening class has no final it is the last week. She has been bringing home some of the harvest including a few kumquats. This morning she told me how to eat them. I never thought about how to eat a kumquat before. 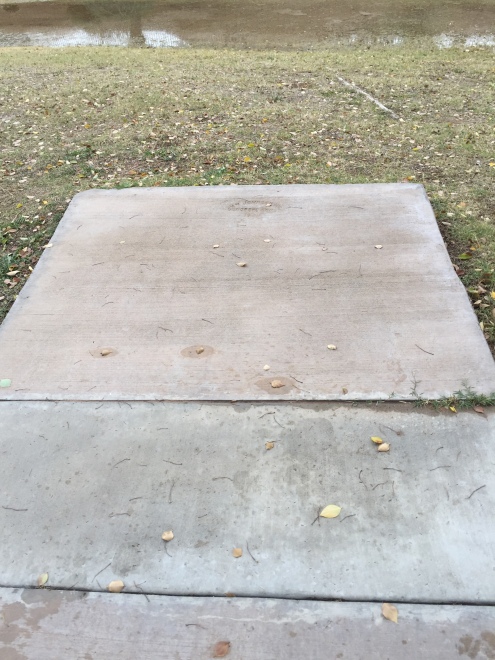 Dug
up
concrete
slab today
thought of ancient text
Where the Sidewalk Ends, we found proof
once upon a time, people walked with their feet firmly
planted on the ground instead of
hovering above
in midair
wearing
jet
shoes

NaPoWriMo Prompt Day 26 – Have you ever heard someone wonder what future archaeologists, whether human or from alien civilization, will make of us? Today, I’d like to challenge you to answer that question in poetic form, exploring a particular object or place from the point of view of some far-off, future scientist? The object or site of study could be anything from a “World’s Best Grandpa” coffee mug to a Pizza Hut, from a Pokemon poster to a cellphone.

Welcome back to day 26 of NaPoWriMo. Phew I am losing steam. Looked at the prompt this morning, then went back to bed after getting Gretchen out the door. Then when Shawn and Rachael left, I get a text, I need my powerpoint presentation emailed to me. So I had to get up and save the day. What would this house do without mom? Then Gretchen sends me a text, They’re taking my phone for AzMerit. Ahh…mom had peace and quiet to enjoy her coffee. Then I had work and then Gretchen came home. Finally after dinner, I decided to work on today’s prompt. 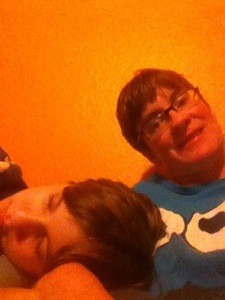 NaPoWriMo Prompt Day 25 – In 1958, the philosopher/critic Gaston Bachelard wrote a book called The Poetics of Space, about the emotional relationship that people have with particular kinds of spaces – the insides of sea shells, drawers, nooks, and all the various parts of houses. Today, I’d like to challenge you to write a poem that explores a small, defined space – it could be your childhood bedroom, or the box where you keep old photos. It could be the inside of a coin purse or the recesses of an umbrella stand. Any space will do – so long as it is small, definite, and meaningful to you.

NaPoWriMo Prompt day 24 – Today, I challenge you to write a poem of ekphrasis — that is, a poem inspired by a work of art. But I’d also like to challenge you to base your poem on a very particular kind of art – the marginalia of medieval manuscripts. Here you’ll find some characteristic images of rabbits hunting wolves, people sitting on nests of eggs, dogs studiously reading books, and birds wearing snail shells. What can I say? It must have gotten quite boring copying out manuscripts all day, so the monks made their own fun. Hopefully, the detritus of their daydreams will inspire you as well!

Welcome back to day 24 of NaPoWriMo. I went off on my own daydream or maybe nightmare. About a week ago, Shawn posted the above picture with a poem to his Facebook page. Once again, I’m borrowing without permission. 😉 Even though I knew the image on the left was a flower, my mind saw peeling skin after a sunburn. Shawn thought I was crazy, but I couldn’t help it. I’ve had bad burns with huge chunks of skin peeling off. The way the petals burst open looks like peeled skin under magnification to me. So today I went on a slightly sideways journey and wrote a haiga for my vision of the photo. Sorry, Shawn, I see what I see.

NaPoWriMo Prompt Day 23 – Our prompt for Day Twenty-Three comes to us from Gloria Gonsalves, who challenges us to write a double elevenie. What’s that? Well, an elevenie is an eleven-word poem of five lines, with each line performing a specific task in the poem. The first line is one word, a noun. The second line is two words that explain what the noun in the first line does, the third line explains where the noun is in three words, the fourth line provides further explanation in four words, and the fifth line concludes with one word that sums up the feeling or result of the first line’s noun being what it is and where it is. There are some good examples in the link above.

A double elevenie would have two stanzas of five lines each, and twenty-two words in all. It might be fun to try to write your double elevenie based on two nouns that are opposites, like sun and moon, or mountain and sea.

Welcome back to day 23 of NaPoWriMo and as you can see, my day job once again influences my poetry – Sorting Laundry. And of course the opposite of work is vacation and the fact my family and I are off to Germany this summer, it became a no brainer for an Elevenie.

Aloe along our front door walkway

Hummingbirds swoop and hover near aloe
drinking in the sweet nectar of flowers
Rejoice in nature, let’s not be shallow
Earth is a lifeboat humans devour

NaPoWriMo Prompt Day 22 – In honor of Earth Day, I’d like to challenge you to write a georgic. The original georgic poem was written by Virgil, and while it was ostensibly a practical and instructional guide regarding agricultural concerns, it also offers political commentary on the use of land in the wake of war.

Welcome back to day 22 of NaPoWriMo and Happy Earth Day! Here are the instructions for writing a pantun. I believe this little piece can be considered georgic, as it is about nature and does present commentary on our use of nature. The picture of the aloe was taken by Shawn Hosking. Once more I’m borrowing a photo of his without permission. And yes, hummingbirds visit the tall flowers on a daily basis.