How to chill after
hard work canoeing around
Tom Sawyer Island 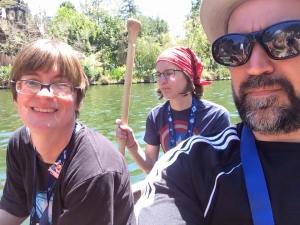 Once upon a time, I would canoe with my dad. He would do most of the work, paddling on one side and then the other of the canoe. This was our first time at Disneyland when the canoes were open. We went on the ride. Wow! Paddling is hard work especially with only one good hand. To all the able-bodied paddlers in the canoe with me – THANKS!

In case anyone has not realized the #haikuchallenge word today is chill. I’m chillin out on the last day of summer break, writing a little poetry.

Well Rachael starts in one week, Wednesday August 5th. Gretchen will have to get up bright and early come Monday. Since I’m good at procrastinating with housework, I decided to check out Writer’s Digest Wednesday poetry prompt – write a poem about open. On twitter the #haikuchallenge word today is beg.

On the positive side to school starting – when I do get off my butt to clean the house, it will stay clean for a couple hours in a day.

Back in January, we registered Gretchen for the regular public school, Agua Fria. They told us about the walk through before the school year begins, but no one told me the hassle it would be. Yesterday was the scheduled time for freshmen and seniors. I thought we could go before 10am dentist appointments. We arrived at 8am and by 8:30 were no where near getting in. The person handing out tickets, signed our ticket and said we could come back tomorrow.

Again today we were up bright and early. Shawn saw on friends’ Facebook pages the line was already big before the doors opened at 7:30am! We left the house even earlier this morning, but our time in Disneyland proved to work well. The signed ticket from yesterday got us to the front of the line. Yes, folks we got a fast pass for high school registration. 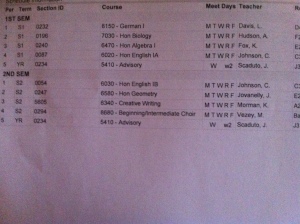 My german girl is taking German 1; she’s excited. We got cafeteria info, parentvue info and Gretchen got her school ID and we came home. Our timing was perfect because I turned on Good Morning America hoping to catch the Ruffino/Diamond story. It came on less than 5 minutes later.

My friend, Laura Ruffino and her husband, adopted Liz Diamond’s 4 girls after Liz lost her battle with brain cancer. I dedicated a poem to Liz during napowrimo – I Felt a Funeral in My Brain.

Here is the online fundraising page for anyone who would like to help the Ruffino/Diamond family. It is a very inspiring story from tragic circumstances.

And now I think I can recoup from vacation before school officially starts August 3rd.

Here are some of our pictures set in the Disney Celebration video. This was fun. 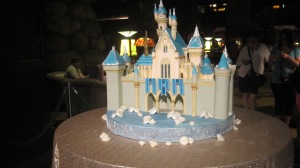 We are back from our trip to California. We left Saturday July 11 and spent a couple nights at Newport Beach. I made the mistake of putting sunscreen on while I was wearing shoes. Sunday night, I had very crispy red feet. We had dinner at the Crab Cooker that night. Gretchen was brave enough to try some clam chowder. She is not a seafood lover. Her meal consisted of the tomato slices that came with my crab cakes.

Monday we drove over to Laguna Beach and then San Juan Capistrano Mission. In the evening we checked into the Grand Californian Hotel & Spa. Yes, my hubby spoils me. He knows I’m not good at walking long distances and the Californian has its own private entrance to California Adventure. They also have a viewing balcony for the light show in the park. Monday night we checked out the Lego store in downtown Disney; had dinner at the Storyteller Cafe and then went up to the balcony to check out the 10pm light show. Shawn rented a wheelchair. I let Gretchen sit in it on the balcony (it has no seats) and by the end of the show, my foot was throbbing. Back in the room we found out why as I took off my shoes and socks, my right foot had a huge bulbous pus blister where it was burned.

Needless to say, Mom was in the wheelchair come Tuesday morning and we hit the parks for the first day. Last time we went to Disneyland happened to be a week before Carsland opened. We headed over there first and lucked out with only a half hour wait for the racers ride. We spent the morning and early afternoon in California Adventure and then went back to the hotel to rest. Then in the evening we spent time in Magic Kingdom. The first night there we got some great seats for the Fantasmic Show. Since my blister popped, I let Gretchen use the wheelchair. It was nice to have a bench to sit and rest my feet during the show. Wednesday was a repeat – California Adventure, hotel, Magic Kingdom. We lucked out again. After we got off the river cruise, the girls wanted more Bengal barbecue and as we were eating Indiana Jones opened up again and we were able to walk right on.

Wednesday night we went over to the Matterhorn. It’s never been open the other two times we were in Disneyland. Gretchen did not want to go on. We set up to watch the Electric Parade instead before heading back to the hotel. Thursday morning Rachael and Dad woke up early to tame the Matterhorn, extra magic hour hotel guests have we haven’t used because Gretchen doesn’t wake up early. Then we all went to the Magic Kingdom and we finished off our three day park hopper in California Adventure. We made the last Grizzly run and got soaked. The private hotel entrance is right across from the ride. We went back to the hotel. Shawn wanted to sit by the fire and dry, but the girls were tired. We brought them up to the room and then Shawn and I went back down to the lobby to enjoy the fire, a glass of wine and some alone time for our last night.

PHOTOGRAPH: Veronica Hosking as a teen with her father Ron.

NOTE FROM THE AUTHOR: My mom and dad had two girls. Seven years after their second daughter was born, they decided to try a third time for a boy. My mom grew rather large with baby number three and kept saying it was her “big, baby boy.” It turned out to be identical twin girls. Well dad still wanted a junior. My name was almost Ronalda. Thanks to my mom who remembered Archie Comics and Veronica’s nickname being Roni, Ron, Jr., became Veronica. And yes, I answer to Ron.

ABOUT THE AUTHOR: Veronica Hosking is a wife, mother, and poet. She lives in the desert southwest with her husband and two daughters. Her family and day job, cleaning the house…

Gretchen hanging out with her big sister in pre-op

Last week it was back to the podiatrist. When Gretchen was in 6th grade she had surgery on her right ankle to help it pivot better. She is missing the subtalar joint in that ankle. She also suffers from flat feet. After the surgery and physical therapy, we haven’t been to the podiatrist since March of 2013. The start of high school is less than a month away, and PE is a mandatory class. In middle school we had Gretchen switched from PE to choir. Now she needs a doctor’s note to get out of PE.

The reason she cannot participate in PE – she has a physical deformity. Yes, that is the reason the doctor gave on the form.

In other news, Gretchen has told me she has finally figured out how to continue her fanfic.