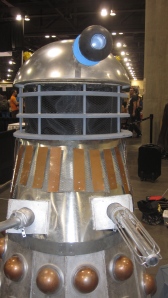 Dalek at the Phoenix ComiCon.

Netflix finally updated Doctor Who – though a little girl I know has been using iTunes gift cards to stay up to date on her Doctor Who.  Also we visited Nonnie at Christmas and were able to see the 50th anniversary episode and Matt Smith’s farewell there.  And right now, Nonnie is about an hour away and I’m writing #haikuchallenge haiku instead of the last minute tidying I should be doing.  I did get a lot of cleaning done yesterday.  Dad and Rachael went off to work.  I told Gretchen we’d be cleaning.  Well Mom cleaned and let Gretchen sleep in.  When I did go into her room to wake her up, I got a big hug.  Apparently she had a dream I died and she was very happy to see me.  Love getting hugs from 13 year olds. 😉

Then when Dad and Rachael got home, Dad was all excited to show me a video of Rachael in a car. By his excitement, I thought she was behind the wheel. No she was the passenger. Why was this so exciting? Yeah I’m not a car aficionado. Dad made a comic with his 280Z complaining about how I keep calling it a her. His new baby is a guy apparently but he treats it like a mistress, in my opinion, so I’m sticking with female references. 😛

3 thoughts on “Doctor Who – Haiku”