#haikuchallenge on twitter was to use the word hope.  The weekly poetry prompt on Writer’s Digest is industry.  Here is how my mind works.  I was thinking of being a book girl because of Monday’s #litchat on twitter.  You know, John Barrowman and his sister, Carole, are writing a book series for middle schoolers.  I learned about it at their table at Phoenix ComiCon.  They had copies there for sale.  I wanted to read up more on the books before buying one.  But now I think I am a bigger fan of Carole Barrowman than John.  I think it’s great John and Carole are working together.

I talked about my book girls on Monday then I mentioned how Rachael’s history teacher gave her class Star Trek notes the last day of school.  She messaged me pictures of the notes. 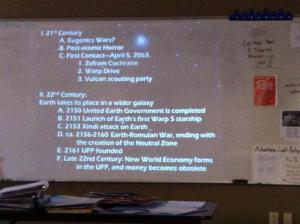 Rachael knew the name of the first warp 5 starship.

Of course I had to show the notes off and Rachael asked her teacher if he knew who Dayton Ward was because her mom just showed him your notes.  She told me her teacher sat in his chair; grabbed her phone to see if his notes really were seen by Dayton Ward; and then he giggled like a school “girl” (my daughter’s words).  When Rachael got home from her last day of school, we had to watch Star Trek VI.  She’s only seen up to IV with the original cast.  And any Trekkie knows the word sabotage is explained in the movie.  Then a couple weeks ago, my husband said he was talking about sabots and no one knew what he meant.  I asked Rachael if she knew.  Oh yeah, it was in a movie we watched recently.  HA! the girl didn’t even remember it was a Star Trek movie!

And yes, all these things were floating through my head while I wrote this haiku.