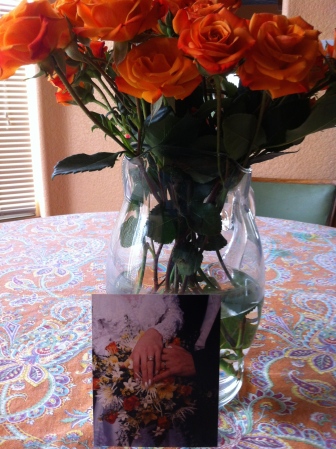 NaPoWriMo Prompt – Today’s prompt is to write a “New York School” poem using the recipe found here. The New York School is the name by which a group of poets that all lived in New York in the 1950s and 1960s. The most well-known members are Frank O’Hara, John Ashbery, and Kenneth Koch. Their poems are actually very different from one another, but many “New York School” poems display a sort of conversational tone, references to friends and to places in and around New York, humor, inclusion of pop culture, and a sense of the importance of art (visual, poetic, and otherwise).

Yesterday my wonderful husband brought home a bouquet of orange roses.  His wife gave him undeserved credit.  I thought he was being romantic; I had orange roses in my wedding bouquet. Wow, our wedding roses! 😀 He looked at me as if I were alien.  No, I didn’t like the tulips.  He likes orange roses.  Hmm… I wonder if there’s a reason for his preference.  So I was thinking about my wedding even though my anniversary is six months away.  And despite the common fallacy, there’s more to New York than the city. My poem today has Buffalo, NY references. I write what I know. 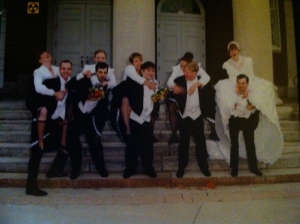